"Why are Tri City Greens better than Bull's Eyes?"

I first heard this comment last year during the miserable weather of the summer of 2011 by a former greens chair whom I have a great deal of respect for and it has been something I've had on my mind to blog about since then.  So when the subject came up recently I was ready to respond. I quickly generated three reasons in my mind for this phenomenon.

Qualifier: All Fertilizer, Top-dressing and Pesticide programs are the same.  They are completed on the same day with equipment shared between courses.  With that said, following are the principal differences between programs.

First, Tri City greens haven't experienced "back to back" winter kills like those at Bull's Eye.  TC green sites are more open and sunnier allowing for a faster snow melt and drying during the spring thaw.  Bull's Eyes greens will refreeze as tree shadows cross the putting surfaces creating damaging ice reformation.  There was winter kill on the TC greens this past year but it was very minor and because they are warmer sunnier sites, recovery came sooner.

Secondly, Tri City greens are cut at a premium height of cut suited for sustainability not green speed as demanded for on the private side.  The higher height of cut makes for healthier turf better suited to survive the tests of summer stress such as those found last summer.  That .055 thousandths of an inch translates into many millions of additional chlorophyll molecules per square foot which adds up to additional food stored in reserve.  Bottom line, better plant health.

Thirdly, Tri City greens are aerified twice every golf season.  No exception.  Cores are pulled and back filled with fresh topdressing.  This process has improved water infiltration, Oxygen/Carbon monoxide exchange and has provided greater rooting potential.

There are many additional reason that are all inter-related to the various levels of agronomic practices.

This begs the obvious question, so why aren't Bull's Eyes greens aerified twice per year?  Quite simply budget cuts and green committee mandates.  On the budget cut side of the ledger, one aerification event costs our budget $2500 in topdressing costs alone. (It takes 50 tons of top dressing to remove cores and backfill holes.)  This doesn't take into account the cost of tines, fuel, labor.  The green committee mandated we skip aerification in 2008 to give the membership a break after the severe hailstorm of 2007.  The greens were aerified multiple times in 2007 in an effort to "smooth" them out.  Aerification was once again cut for the year 2010.  Planned for aerifications were cancelled in 2011 when the air temperatures on the date were in the 90's and outing schedules prevented rescheduling until fall.


My recommendation has been and will always be two or more aerifications per year and a return of the deep tine program in late fall to encourage surface drainage for those early winter thaws. 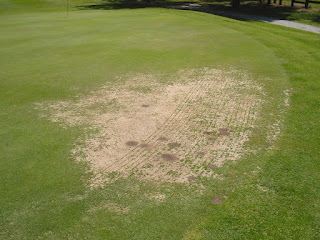 The photo above shows winter injury in the year 2009 to the back of Tri City's #1 green.  Tri City is not immune to winter injury and has seen its share over time.  In 2010 this area also had damage, but to a lessor extent as our inter-seedings began to take hold and fill.  The damage in this area lessened over time.  Close examination of the photo shows rows of seed planted by a seeder we demoed for that purpose.  You can preview that seeder in my Top Ten needs section.   _Mk