"Houston; We have a problem!" 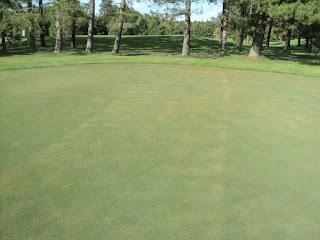 What you are looking at is two passes made on our nursery green using .25" needle tines on 2 x 5 tine holders for a total of 10 tines per block.  There was adequate soil moisture at the time of our test run.  We made the test run to evaluate tine spacing and depth for a summer stress management plan of action called "Venting."  I want to be pro-active and in action ready mode should we experience another summer like 2011.

This is unacceptable damage caused by a machine who's sole purpose is to make things better! 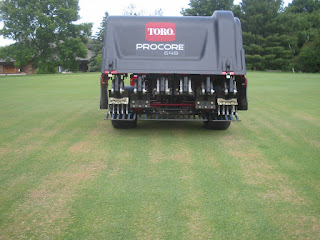 Here's a photo of post aerification damage taken in June of 2009.  In the photo above the damage is more severe because we used two rows of smaller open diameter tines and pulled cores in an effort to speed post aerification recovery primarily for golfer satisfaction.  At that time we blamed the scraping blades of the core harvester for causing the injury.  I recalled the pattern of our injured turf on several greens after last Augusts aerification!  Hell, instead of making things better, we've been making things worse! Poisoning our own well so to speak!

There's NO WAY I'm using this aerifier on putting surfaces until a solution is found!

The problem is a lifting of the turf and a tearing of the roots at some point below the surface.  In essence, the aerifier is acting like a sod cutter!  Sod with no roots and with an open hole to atmosphere quickly dries out and goes dormant or worse yet dies!

Our investigation into the cause of the problem and intent to secure a solution for our troubles took many avenues last week.

Equipment manager Tim Johnson read the operators manual from cover to cover and posted pictures of our problem on the Golf Tech website. We were given some suggestions to alleviate the problem.  He adjusted the angle of the head.  He adjusted the forward speed of the traction unit.  He investigated the turf guard hold down pressures against the turf.  He called other golf course mechanics.  Service bulletins were reviewed in an attempt to glean useful information.  Many test runs were made with the results analysed.

As Superintendent, I used my many turf grass connections in the industry and have been in email contact with golf course superintendents from Wisconsin and Minnesota that own the machine.  I asked them if they have seen the problems I've experienced and what they did to resolve them.  Two courses actually sent the machine back!  We were in contact with the engineers the Toro Company seeking their input and advice.  Reinders, our Toro distributor, sent three men to review the problem and offer recommendations. The problems were discussed with University of Wisconsin professors, one of whom labelled the machine as "extremely aggressive."  No argument there.

The recommendation and course of action we will follow will be to remove one row of tines from the tine assembly. To trial this tine configuration, Tri City greens will be aerified on Wednesday of this week. We have noted little if any damage to Tri City greens following aerification when using the single row tine blocks.  If I do, we will postpone the aerification of Bull's Eyes greens until the time we can secure other aerifiers that will do the job.

Thanks for all the help, I'll keep you posted. _Mk