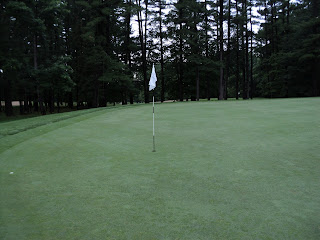 What's so rare about a pin location you might ask?  It's sad to say but the last time I saw a pin location set in the front left of 16 green had to be late fall 2010!  You know the history as well as I but please indulge me.  We encountered severe winter kill in that section of the green coming out of the winter of 2010-2011.  A cold, wet, dreary spring that immediately turned into one of the warmest and wettest years on record all but stymied every attempt at regrassing this green.  The fall of 2011 saw plenty of grass germination, but no significant filling in.  The winter of 2011-2012 witnessed more death when carry over of the true annual bluegrass variety died after completing its natural life cycle upon seeding this spring. There to was ultra frustration with a lot of bentgrass that still refused to budge and spread this spring due to repeated frosts and cold soil temperatures.

As I told several people, all the ingredients were in the bowl, we just had to patiently wait for warmer weather to finally arrive to warm the earth to the point that fertilizers were available and a plant that could actively use them.  Aerification was the trigger mechanism that really set things in motion both above and below ground.  (A second aerification should be done in August of each year.  Hint, hint.)  The green began to grow, heal and fill in to the point that we could set a cup in this zone once more!  While still far from perfect, #16 is on the rebound and hopefully back for the long haul.  We'll just keep on treating this green as we would if we were growing-in one from scratch.  There's significantly greater bentgrass on that green today than what was found there in 2010.

As for the song sung by Rare Earth, "Maybe it's time to Celebrate!"  Enjoy! _Mk