First I want to thank Randy Luscher of BASF for the invitation and thank the great people of Farmlinks for all the hospitality.

I left home for Madison at the ungodly hour of 3:30 AM Tuesday April 3rd to the sights and sounds of Lightning and pinging of pea sized hail.  Travelling east to Bancroft I was hailed on two additional times by marble sized hail.  Thankfully the road is straight across the Buena Vista marsh as my windshield wipers had a difficult time keeping up in the down pour.  (When I later returned home, I learned the course received less than one tenth of an inch of moisture which we needed badly at the time.)

I rendezvoused in Portage with my traveling partners Scott Gilbertson, Sales Engineer from Reinders Brothers Inc. and Darren Armstrong, Golf Course Superintendent of Cedar Creek Golf Club in Onalaska Wisconsin.  (While waiting for our departure, we discussed problems associated with our Toro ProCore 648 Aerifier.  Seems Toro has updated the aerifier with a new "float" switch not present on our unit.  Thanks Toro.  I've been pulling the hair out of my head trying to resolve the scalped torn turf for the past five years.  With this information in hand, the trip was already worth every penny.)

We planned for a round of golf the afternoon of our first travel day.  We played a Tom Fazio designed course west of Atlanta named "The Frog."  Nice layout and enjoyable round of golf but much too warm and humid for my blood this early in the year.  I was pleased with my first round of golf for the year because it included two birdies but wasn't happy about the pain of a tennis elbow flaring up on the back nine. Scott managed an Eagle 3 on the finishing hole after blasting his second shot a foot from the hole.  (We made him putt it out.  Hey we're cut throats.)

That evening we sought out found a Cajun restaurant in Douglasville Georgia named Gumbeaux.  It was well worth the two and one half hour wait for a table.  Being resourceful Wisconsinites, we gave the hostess our cell phone number to page us when our table was ready.  The food did not disappoint.  Blackened Catfish, Oysters, Crawdads,  Jambalaya.  The samplers platter was enough to feed an army.

We learned via email that the rental car was due back by 10 AM.  What we didn't know was Birmingham Alabama is in the Central Time Zone! So the extra hour was spent in the Birmingham Airport waiting for our host Randy and six additional Wisconsinites that would be a part of our tour group.  They wouldn't be arriving until 2 PM so there was a lot of time sitting and milking the free WIFI Internet service at the airport.  I noticed several Midwestern superintendents heading home from their Farmlinks experience. 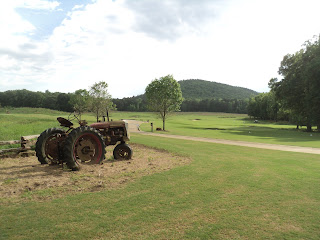 We were picked up as a group by the Farmlinks shuttle bus for the forty five minute drive to the research course.  Farmlinks is an eighteen hole living research laboratory.  The purpose of the golf course is to test various technological advances in golf course maintenance.  They were evaluating a new bunker liner product that caught my eye as I was thinking how useful this would be in our thirteenth bunkers.  The course is a Hurzdan Fry design.  Part links, part woods.  In fact I was surprised at how mountainous this part of Alabama was.  (It is the lower end of the Appalachian Chain of mountains.)

Due to heavy weather forecast for the next couple of days, we were allowed to play nine holes upon arrival.  Not sure if we would play the next day, we took them up on their offer.  3 nines, three birdies.  Not a bad start to the year.

The first full day included a course tour regarding maintenance practices used in maintaining bentgrass putting greens in the deep south.  I found it interesting to know they used backpack blowers inserted in the drain tile vent to force cooler air trapped in the pipe upwards through the rootzone to keep the greens alive in the summer.  We were given a tour of the new maintenance shop that was under construction to replace the former shop that was destroyed by fire. Lightning was the match and equipment full of gasoline was the accelerator.  State of the art communication and flat panel TVs would come in handy as training aids.

In the class room we were shown the golf cart GPS tracking software.  This was some pretty cool technology.  Besides showing course yardage, they had the ability to communicate and track every cart on the course.  Drive off the cart path and the cart would shut off with the only way to move forward again was by backing out the way you came in.  We were shown a graph that plotted the route of every cart used the day before.  This was interesting to me because you could specifically target areas for aerification to minimize cart damage.  If I knew earlier our cart routes were being monitored, I would have made tight spirals down the fairway or would have tried to spell out my name in cursive just to mess with the golf shop.
Our travel day home was on Good Friday and what could best be described a day of pure hell.  Our flight from Birmingham to Atlanta was delayed because the plane coming in to pick us up had "mechanical issues" AND the back up plane Delta put into service had a flat tire!  Sure Delta!

Guaranteeing seats on a later flights only guarantees you lose the seats on the flight your seats were first guaranteed on!

On the flight from Birmingham to Atlanta I swapped seats 1C, (bulkhead, no place to store my briefcase so I tossed it in the overhead bin) with one of our tavel-mates because he was younger, faster and hadn't checked any luggage.  His seat was 12C (Exit Row.)  The idea was to have Todd run to our connecting gate to tell them we were on the way.

Off course the last person to board the plane was seated right next to me in 12D.  A gentleman named Abraham and of middle eastern decent.  (I'm sure he was profiled by TSA.)  Abraham was travelling home to see his family for the first time in three years.  He's been working in this country for fifteen years and has dreams of relocating his family here someday but something like 9/11 has slowed things to a snails pace.  I can now mention that he was returning to war torn Yemen!

The announcement to turn off all electrical devices before takeoff was made.  It was then I remembered that my bag was in row 1 and my cell phone was still powered on!  I've been in planes were the pilot would announce that he would not leave the gate until the person with the cell phone turned it off.  I'm thinking I better not approach the front of the plane for fear of being taken out by a Sky Marshall or tazzed by the flight attendent!

Delta hurried us onto the plane with the hopes everyone with tight connections could make their scheduled flights.  It's a 26 minute flight, our hopes were high we could make our flight, we had ten minutes to spare?  That is until we sat on the tarmac for 15 minutes before we taxied out onto the runway for our departure.  We pulled an OJ through the Atlanta airport to our next gate only to get there to find  gate had been changed to one that we ran past on the way to the gate posted on the departure board.  Both Todd and Darren noted the location of the flight to Madison WI on the Departure board.  Encouraged by the fact that  the flight we needed to catch was delayed and still at the gate.  When we got there we couldn't board because Delta oversold the flight and had given our seats to standbys because we were "guaranteed seats" on the last flight home.  What!  We went to Delta's service desk to lodge a complaint with management and were given a $7 voucher for food for our inconvenience.

But some of our troubles didn't end there.  Scott checked his perfectly intact set of clubs into Delta's care only to find his Taylor Made driver broken in three places with a nice hole punched through his Club Glove Golf Travel Bag.  His request for restitution was denied by Delta as it wasn't their fault!  What! The clubs and bag were "whole" when entrusted into Delta's care and now there not!  But somehow that's our fault for checking golf clubs as luggage.  (And no, we were never given a waiver to sign.) 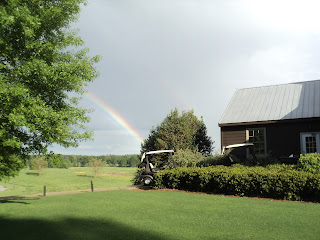 It was a very educational trip and we all know flying is a pain, but if I had to do it all over again, I'd do it again tomorrow.   Thanks BASF, Randy, Scott, Darren and all the folks at Farmlinks.  _Mk
Posted by Mark Kienert, CGCS at 3:50 PM