To Cover or Not, that is the question?

Many golf courses cover their greens each winter before permanent snow cover to protect putting surfaces from winter ills.  Some of the benefits to covers are (but not limited to) soil temperature modification, protection from wind dessication and mitigation of damage from water and ice during the spring melt.  The downside to covers are that they are costly, require a lot of storage space and have to be installed before the ground freezes shortening the golf season by a week or two.  The Pro's and Cons of covers are too numerous to mention for this post.

When I pulled the covers from our sixteenth green I got exact opposite of what I expected.  Normally I would have seen the grass beneath the cover to be greener and a head of the portion of the green left uncovered.  In the photo below, the cover actually retarded growth! 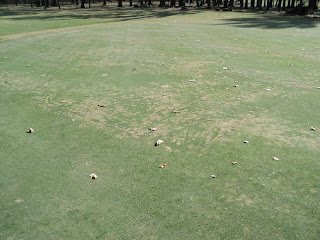 The turf in the foreground was left uncovered and the difference in plant health is very apparent.
This is what I know. When the covers were removed the soil beneath the cover was completely saturated and still cold.  We had difficulty removing several staples from the ground due to a soil that was still frozen.  This was in spite of the fact its been in the 70's for a couple of weeks.  Due to the heavy winter shade that exists in this location, the plant never had a chance to emerge from winter dormancy and commence growing.

With this argument, covers might not offer the benefits expected on a heavily forested golf course such as ours.  The biggest issue we find coming out of winter is the annual damage to our putting greens from water and ice.  So if I would ever invest in covers for your course, they would be the type that were impermeable to water and offered some benefit of insulation to the turf.  They would have to be large enough to completely cover the green and surrounds to the point that zero water could migrate under the cover.  _Mk