Staying the course, slow but sure.

You should have noticed by now that the Seed Guard tarps have been removed from afflicted greens.  The overall success of using tarps depended on where the tarps were located.  Sun light, green orientation to sun angle, direction of play, foot traffic and drainage to name a few were indicators of our emergency repair success.

In the process, we learned that bentgrass seed does not germinate at temperatures greater than 90 but more importantly Poa does not germinate at temperatures greater than 80.  Hence things really didn't "take off" until after the weeks of 85 plus degree days (almost 20 degrees warmer under the tarps) passed and the weather finally felt more like fall that we were able to count success.  Success in the fact that we see more bentgrass than poa!  The tarps did keep foot traffic and perhaps the biggest plant killer of all time, mowers (low mowing heights of cut) off these areas until seedlings had a chance to establish.

Ideally speaking, as we move closer to fall, tarps would remain in place as they help retain greater soil temperatures needed to promote healing when the night time temperatures turn cooler.  We are removing them as they have started to rot as most paper by products do after being exposed to the elements of sun and water.  They can only be removed so many times to allow for mowing before they simply fall apart at the seams. 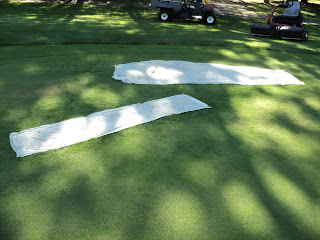 To put it mildly, it has been a very long and frustrating year trying to hold putting green turf together. 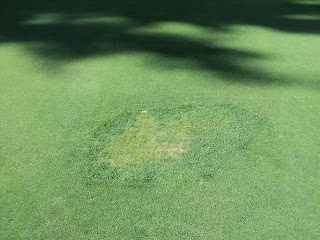 In the photo above you can see countless Bengrass plants at ready to fill in the void where the Poa plant checked out this past summer due to heat, moisture stresses.

What's to follow? Over the next several days, these "scars" will be fertilized to promote growth and mowing heights will be slowly lowered "close" to "normal" putting green height to promote plant density.  Some area's will be seeded once more before nightly frosts defeats our efforts while others, now that the damage has been reduced to a "manageable size," will be "plugged" as they will not heal sufficiently before winter sets in. _Mk
Posted by Mark Kienert, CGCS at 3:35 PM