I received an urgent message over the radio from our greens roller operator reporting damage done to our fourth green.  Redirecting my own mower, I headed over to see what kind of damage would greet me.  Boy after a year like this, more damage to putting greens was something I did not want to see.  I feared the worse and hoped for the best. 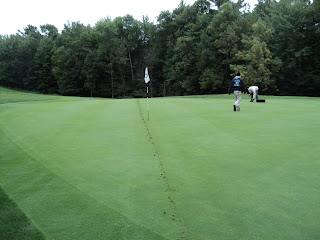 Sure as "the shortest distance between two points-is a straight line," the damage was as I expected.  A part had fallen off the roller frame and pierced the turf.  I've seen this damage many times before, usually left behind after a pine cone, acorn, or stick became lodged between the bedknife and frame after being driven over by an operator "too rushed" to get off his machine (for probably the twentieth time that half hour) to pick sticks. 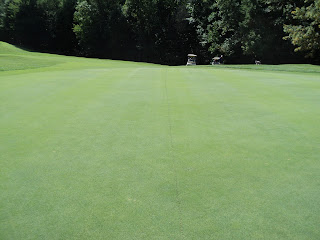 Treating the wound as we would the plug for a cup set hole or the repair of a ball mark, tamped down and carefully topdressed, the stripe should be completely healed in a week or two.  _Mk
Posted by Mark Kienert, CGCS at 11:52 AM