Starting the 27th of October number 14 green was ripped up to enlarge it.  Below is a photo essay of that work. 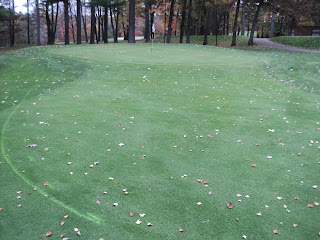 #14 green was designed by Stiles & Van Kleek; a Boston Massachusetts architectural firm in 1922 and was constructed by the Leonard McComber construction company from Chicago Illinois.  The green painted line in the picture above is the foot print of the new green. 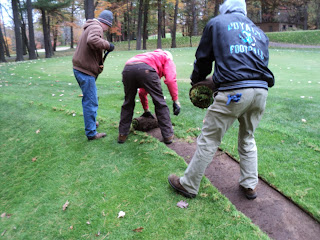 Sod was stripped from the approach and saved to repair weak collars found on other greens through out the course.  Bentgrass sod never did match up with the Poa laced sod that it replaced.  This sod would match the older turf perfectly. 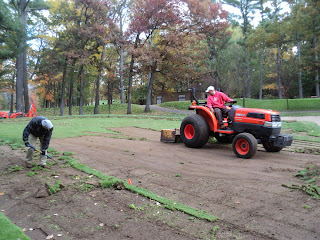 Sod from the putting green and surrounds was striped and saved in our spoil piles. 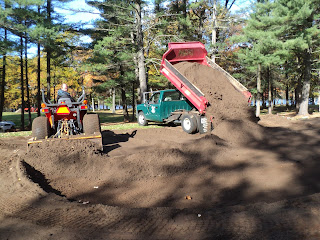 The former approach was hollowed out and the cavity backfilled with greens mix.

History Lesson:  The original green was constructed by capping the sand base fill with 6-12" of black topsoil (to hold moisture.)  The top 4 inches of sand is the result of thirty plus years this green has been topdressed with sand. The white column of sand in the center of was the result of deep tine aeration hole backfilled with sand and provided internal drainage during stressful summers. 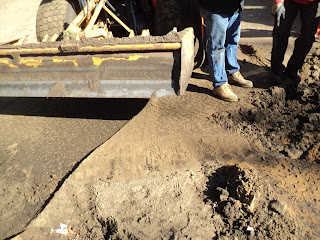 This layer had to be removed from the existing putting surface as it greatly impeded drainage.  It peeled up in thick slabs.  If you look closely, you can see the pores punched through this hard pan by the deep tine aerifier.  This is the principle reason I always valued deep tinning more as a tool for drainage. 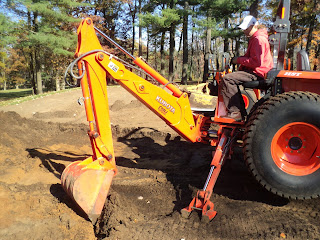 We first used our back hoe to mix the black soil with the sandy subsoil but this method proved too slow. 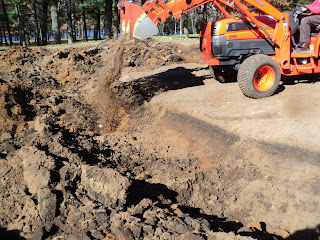 Ultimately, we used our front end loader to peel, chop, mix and bury this layer.  A good old fashioned deep rototilling operation would have blended the two soils better. 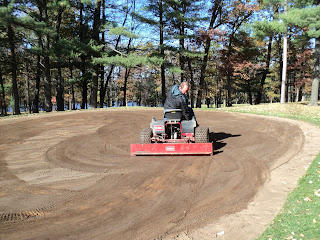 The new surface being "floated in.  Without GPS, Scott tried to retain some of the unique features of the old putting green surface. 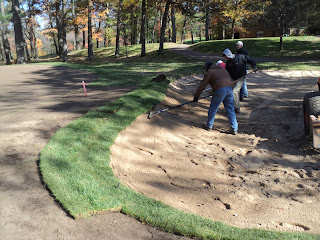 While we were at it, the bunker was moved to create a wider footpath and the ugly built-up lip of sand was removed. 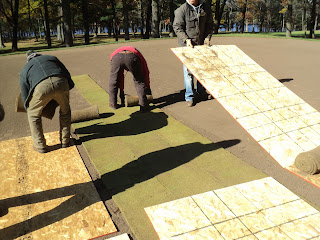 Sod harvested from Lawsonia Golf Course in Green Lake was unrolled.  It took us two days to complete the sod laying due to travel times and intensive labor involved in cutting, rolling and stacking of sod.  We simply ran out of day light.  Original plans to use large roll sod and machinery to lay it fell apart when the nursery became "sold out" due to other projects in the area. 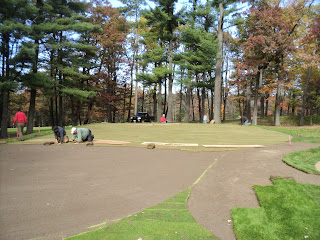 We completed approximately 70% of the green on day one.  It looks good from a distance. 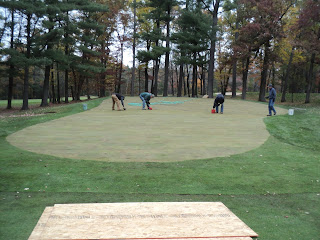 The seems are being topdressed as it is impossible to match the edges perfectly.

When will this green be ready for play?  Good question and unknown at this time as we will need to aerify and topdress this green multiple times in an effort to "level it" enough for greens height of cut mowing let alone play.  It will remain bumpy for sometime until a new topdressing layer is built up to smooth the surface out.  While not ideal, this new addition is an improvement to the ever present condition of a green that has struggled during times of super summer stress.  _Mk
Posted by Mark Kienert, CGCS at 1:13 PM