I was recapping the spring of 2013 in my mind for the purpose of this blog post when it dawned on me that the course has been open a mere four weeks.  Can't explain why it seems we've been open a lot longer; it must have something to do with June 1 knocking on the door step.

Week 1.  The grounds crew was busy getting both courses open and ready for play.  Raking, blowing, sweeping. Opening bunkers, setting out course accessories.

Week 2. We found ourselves busy filling, pressurizing,testing and repairing the irrigation system to the point that we could trust it to water the course without fail.  We discovered one failed head that would have caused significant damage (washout) had we not tested the system before hand.  The system was filled slowly and the systems plumbing was allowed to "warm up" to thaw the pipes as several feet of mainline was still buried beneath snow pack. 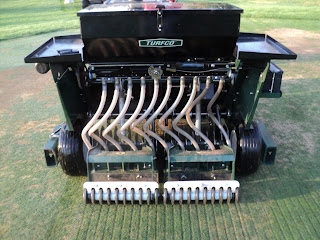 Week 4 has the crew edging bunkers, an annual task that is done as soon as all hands are on deck.

Last week I was in Lawrence Kansas having been selected to serve on the Membership Relations Committee for the Golf Course Superintendents Association of America.  It has been my privilege to serve the GCSAA on so many committees over my tenure of being your golf course superintendent.  I've meet and spoken to so many superintendents from around the country and enjoy coming away with new perspectives.  On this trip I learned the height of cut was so low on a recent PGA tour event that greens were syringed with water (lubricant) immediately before mowing to prevent the bedknive from tearing the turf! In essence the bedknive became a skid shoe!  Jeez,  I guess you can do those things when you have a budget north of 2.5 million dollars!  (5.68 years for us and they don't have to take care of Tri City!)

The rains have been very timely this Spring.  It seems like we've been blessed with an all day soaking rain every five days.  I know that hasn't been good for the farmers, but it sure has been good for the mosquitoes.  It has been a bumper crop the likes we haven't witnessed since the 90's.  The little bastards are buzzing about my head as I type this.

While last year is a painful memory, I can say without hesitation I'm most proud of this. 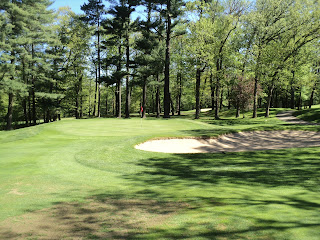 While several greens are struggling to overcome the latest round of winter injury, your "DOA" fourteenth green is a picture of beauty nine months later. _Mk
Posted by Mark Kienert, CGCS at 3:32 PM