It's been a Busy Week!

News, notes and musings of maintenance activities for the week of September 10th, 2012.

Fairways  were sprayed to clean up Dollar Spot that is very aggressive at this time of year and what appears to be Brown Patch working.  The weather has been just warm and wet enough to see Brown Patch, but cooler drier days ahead will take care of this disease environmentally.

Secondary work included spiking and inter-seeding of weakened areas of putting green turf.  This is our last chance to work seed into the ground to expect good germination and growth as warmer soil temperatures offset cooler nighttime lows. Those areas were also topdressed by hand.  Topdressing will protect the crowns and any juvenile plants trying to fill the voids.  Your problem greens, #3, 6, 12, 15, (14 & 16) were fertilized once more.  Just when the surge of growth from the late August application was finally tapering off, (we could mow more than one green before emptying our buckets,) we feed them once more!  We are pushing those greens to fill in as much as possible before the cooler weather of fall puts an end to top growth.  There is no growth regulation (PGR's) in place and the greens are doubling their height of cut daily!  You can tell instantly if you skipped cutting an area or if your mowing overlap is incorrect.

What do Mark McGuire, Sammy Sosa and BE greens have in common?  They are juiced!  This is the most fertility these greens have seen over the past five years and by the growth, it shows. 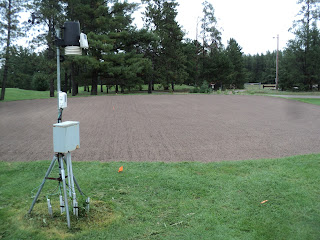 The Nursery green was prepped for seeding.  100% of the sod from this green was moved to other greens around the course.  (Editors Note:  Later this month I will discuss sodding in greater detail.)  This green has served us well as a test green to evaluate newer bendgrass cultivars to see if they have a home here on your course.  One half this green will be seeded to Alpha and the other half to an experimental variety called V-8.  We aborted seeding this green Tuesday afternoon as 20-30 MPH winds would have made seeding difficult.

Speaking of Tuesday afternoon, has anyone but me noticed each and every golf outing or tournament we've hosted has air temperatures above 86 degrees?  For crying out loud it's September already! 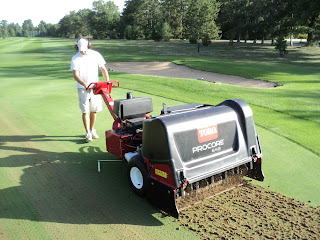 Tri City greens were aerified for the second time this year.  This aerification is two weeks later this year than what has been scheduled in the past.  That's because our attention is on Bull Eye greens.  I've always maintained that you can add a weeks healing time for every week of delay when putting off aerification past Labor Day.  We'll see as our timing couldn't have been more perfect as we were blessed with a slow .3" soaker overnight.  It is very, very rare to mow greens the day after aerification and NOT fill your buckets with just sand!   Mowing was no worse than cutting after an application of topdressing.  Also I don't know what it is but aerification of Tri City greens flows like clockwork.  While we use the same recipe, aerification of BECC greens seems like a death march as the guys get tired and fatigued.  Maybe it has to due with the size of greens over there and the guys see a real progress and an end in sight.  Or maybe it's due to practice.

After aerification, the nursery green was seeded, fertilized, hand raked and dimpled with sand pro tires.  As I mention earlier, we are running short of time but hope to have this green germinated and up before the first frost can damage it.  If that is accomplished there should be just enough time for seedlings to establish (six weeks) and harden off for winter before the days become too short and cold.