I wanted to wait until now to tell a story of property vandalism that occurred on your golf course late last fall. It was the Thursday nearest Halloween when I was making my rounds blowing off green and tee sites when I noticed the white ring at the base of one of our most beautiful fall foliage trees. (See your clubs webpage for a look at the spectacular fall color of purple.) 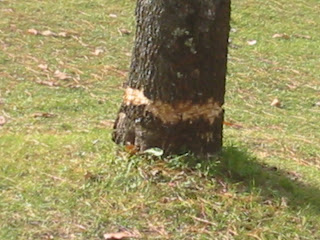 For you see it was a cool damp grey day and whiteness of the scar was in great contrast to the day’s skies. I noticed it to because the previous day I set out cart restrictions and normally set an arrow at the base of the tree to make the arrow more "visible" and to protect the arrow from being driven over by the wonton cart operator that “just wants to show me” what he thinks of my decision to protect the non growing turf from “pre winter” damage and next seasons use. 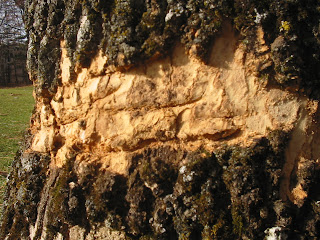 At first I thought it was mechanical damage cause by one of our machines, blowers, sweepers, mulchers. Upon closer inspection you could see that wounding of the bark climbed up an over an older wound. A view from up close revealed that the wound was caused by a chopping motion, an attempt to girdle a tree. 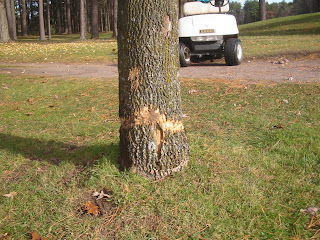 This tree, a hybrid Autumn Purple White Ash was planted by me in 1987 in response to the Late Jim Dupree’s comments of having lost in a storm several of the tall white pines behind #11th green that guarded the dogleg on #13 a few years earlier. I can only speculate that the person responsible for this axing was doing so because they didn’t like the “double” jeopardy of being in a bunker hazard now staring at tree as they attempted to reach the green in two.

I requested a list of names of all peoples that played the course from the time of no damage to the time that the vandalism occurred. This list was easily provided to me by the golf shop as play was down due to the cold wet weather.

Now to that person I would say, would you pleases come to see me? I’ve two more trees that I would love for you to practice your art and science of killing. In fact I would happily start the chainsaw for you.
Posted by Mark Kienert, CGCS at 3:25 PM