I was beginning to wonder if this would be the year we escaped storm damage.  The high winds that tore through the area at Midnight Wednesday put and end to that thought.  Our on course weather station recorded a wind speed of 36 MPH and a paltry .22" of an inch of rain.  A quick tour of the course suggested light damage overall.  Tops of few trees missing, a limb here a stick there.  I've witnessed worse and reminded myself of the wind storm of 2001 when we lost over three hundred tree. Some of that damage you can still see today if you know were to look.

Then I turned the dogleg on #16 and found myself muttering "Oh Crap."  The largest black oak on the course was now laying directly on the green.  This didn't really surprise me as this tree had been in decline and hollow for as long as I've been here.  With the passing of nearly every strong storm I could count on finding at least one major limb waiting to be cut up.  Here's a few photo's. 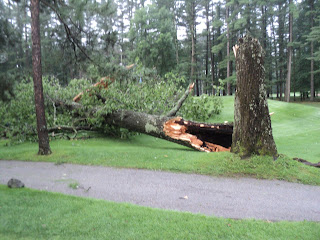 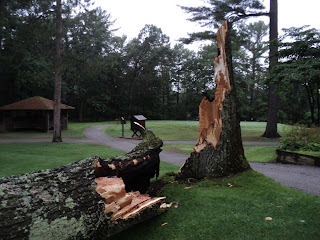 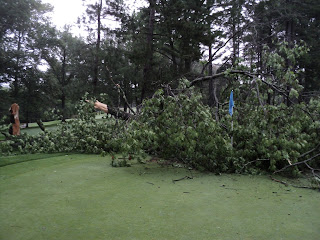 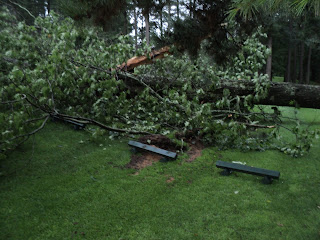 Damage to the putting surface is being repaired by seeding, topdressing and the larger scarred sections will be "plugged" with sod taken from our nursery.  This will be an ongoing process.
WHAT A DIFFERENCE A YEAR MAKES!
I looked at my soil temperatures on August 2, 2013 around 2 PM and found them to be 68 and 69 degrees at 2 and 4 inch depths.  Last year during the drought, they were over 85 degrees.  The irrigation water we pull from the river was over 90 degrees last year, it's cool to the touch coming from the wash rack hoses this year.  I'm enjoying the fall like summer we've seen to date and the turf is much happier too.  _Mk﻿
Posted by Mark Kienert, CGCS at 9:07 AM