....."Pea's porridge in the pot, Nine days old."  I never understood that century's old rhyme but my calendar tells me it has been nine days since we started regrassing several greens hammered by this summers record heat and drought.

Here's of photo of #14 green a mere nine days after inter-seeding. 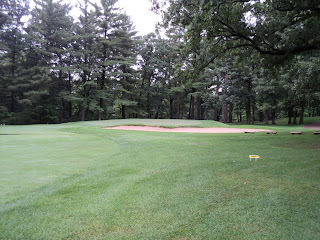 Here's a look at #16 green just seven days after renovation. 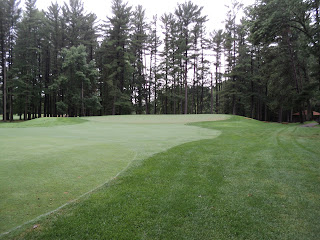 Our efforts were finally rewarded by an extremely welcomed and timely break in the weather.  To think the stretch of 90 degree days just ended ten days ago!  August has been very kind to us weather wise and it now shows by our seeding success on those two greens.  Timely and cool rains has helped lower soil temperatures to the point of rapid germination for the Bentgrass (between 70-80 degrees) but warmer than the optimum germination temperatures for the Poa Plant.  This scenario is exactly what we wanted, Bentgrass coming in before the annual bluegrass.  Some annual bluegrass will germinate, but we have decidedly tip the scale in favor of the bent plant.  This should greatly increase these greens summer stress survival next year should it be another tough one.

In the weeks ahead, these two greens will be pampered with fertility to help them mature and gradually cut lower to get them to spread out laterally to fill in.  As Head Pro Joe stated, "There's more grass on those greens than what we had in May."  Not quite, but I'm very encouraged by what I see popping out of the ground today.  Stay tuned.  _Mk
Posted by Mark Kienert, CGCS at 10:53 AM