In an effort to assist rapid evacuation of water off putting greens during snow melt, sections of sod was removed in drainage patterns on greens suseptable to winter injury caused by ice damage. 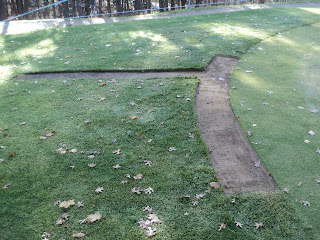 The removed sod was placed over the sand in bunkers for safe keeping.  (Having heard of the successful implimentation of this practice on other courses, I have no experience if this sod will survive winter due to the lack of moisture and desication.  I would rather have dead turf in bunkers vs. dead turf on greens all things considered.) 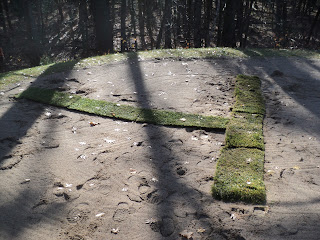 All our efforts didn't come without fail.  The turf is still very weak and the lack of rooting going into winter is alarming.  As seen in the photo below, the turf is not "knitted" together well enough preventing its removal on greens that really needed this treatment. 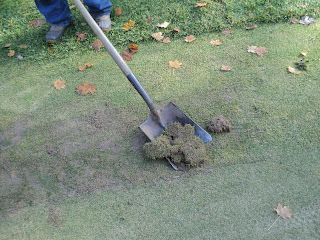 Editors Note:  Over time a lip of sand has built up in the collar to bluegrass interface.  This lip was formed by the heavy topdressing requirements needed to backfill aerification holes.  To fill aerification holes sand is moved by sweeping equipment to green centers then back off the green to disperse it.  Over many years of this practice a lip was gradually being formed.  This lip slows positive drainage and backs up water on the green creating additional stress to the turf being growing there. Unfortuneatly these areas are the same "walk on and walk off" areas that recieve the most foot traffic and has shown historically the most winter damage throughout the years.  Once the sod has regained strength, it will be removed and the subsurface soil removed to lower this area to regain positive drainage flows.  _Mk
Posted by Mark Kienert, CGCS at 8:45 AM