By now you have noticed that fairway aerification has been completed.  Just for the record, we managed to knock off 20 Acres of fairway turf in just two days.  We barrowed two GA-60's from Lake Arrowhead that allowed us to pull off this feat.  In the past with fewer machines we would have been luck to do this work in four days.  I swear if I had one or two more dragmats, workman to pull them and operators to drive them AND if it wasn't Friday, I believe I could have knocked off the 20 acres in one day. The only downfall was the soggy seventeenth fairway and rainfall that prevented complete core cleanup there.  This fairway needs to be rebuilt at a considerable capital cost. 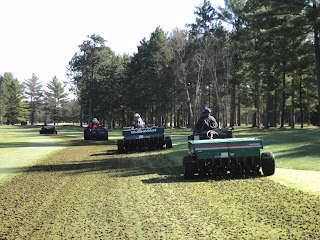 Speaking of drainage, I called in a contractor to "Hydroblast" the drainage line that connects the drainage from little lake on #11.  What we found was a break in the drain tile on #16.  This line was "cut" in 1994 during the irrigation system istallation!  It took several rainy months for the problem to literally surface.  I'll write more about this when the area finally dries up and allows us to move in to correct and repair the drain line.

I spent Monday and Tuesday in Las Vegas, Nevada assisting the Golf Course Superintendents Association of America (GCSAA) planning the 2012 Golf Industry Show by serving on the Conference Logistics Committee.  I know, I know, it was a dirty thankless job, but someone had to do it.  BTW, didn't gamble so I didn't lose any money either, but did drop significant money on a fancy night out on the town.  Took in the show "The Blue Man Group" which was awesome.  I'll never be able to look at white PVC irrigation pipe the same way again with out the urge to "beat on it" with a stick! _Mk
Posted by Mark Kienert, CGCS at 12:30 PM