The US Open Browns


Blame it on the Poa. Yeah right. Conversations I had with members this past weekend regarding the appearance of the putting greens at Pebble Beach is the basis for this conversation. First and foremost, I hated it. It was difficult to turn on the my television and look at those surfaces.  The bleamishes, the spots of dead grass, it was nightmarish.  I didn’t like how the ball rolled across these areas and I swear they fell into a depression each time the ball stopped rolling. The talking heads or "on air talent" all blamed the Poa.  I blamed the severe moisture stress the greens were subjected to and the resulting hydrophobic soil conditions for the appearance of those putting greens surfaces. Those patches could have been very easily the only Bentgrass found on those greens! 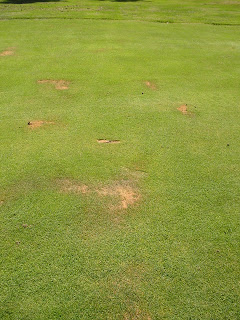 I’ll post a couple of pictures taken today of hydrophobic soils on Bull’s Eye and these areas are now showing up after four weeks and nearly seven inches of rain for the month of June. Also I’ll paste a link to the USGA’s comments on the appearance of Pebble Beach when I track down the article for a scoop of the "official dirt" when the forum I read regularly is back online. 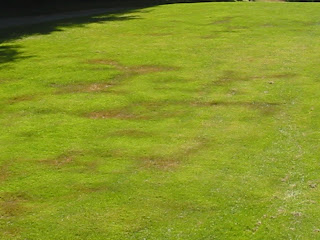 Can’t really say I would like to fork out $499 to play on putting greens that look like those did for the open. I do know they didn’t look like that during the 2000 US Open when I stood on the 4th green (or was it the 11th?) as a buddy of mine Dave Ward CGCS of Olympia Fields Golf Course preparing for the 2001 US Open took stimp meter readings all for the purpose of putting green consistency.
Posted by Mark Kienert, CGCS at 2:39 PM