Been away for a while

It's hard to believe my last post was November 1, 2012.  A lot has happened since then.  Vacation time spent travelling to watch the Badgers get beat by Penn State in "Happy Valley" losing in overtime in arguably the coldest game day I've experienced in a very long time. Then up to MetLife stadium to watch the Packers lay an eqq on Sunday Night Football getting creamed by the New York Giants.  It was just as cold, but this time I wore my ski pants!  Then down to Philadelphia to visit as many historical sites as possible and to quaff a beer in Philly's oldest pub.  We slowly made our way to Indianapolis for the B1G Championship game and refused to spend the night in Columbus Ohio for obvious reasons; I'm allergic to "Nuts."  At this point my money was on going 0-3 on the trip, but the Badgers "Blasted" Nebraska 70- 31 in the championship game!  It was unbelievable.  No I didn't go to Pasadena for the Rose Bowl game having done that in 2011.  When I began researching airline fares, I found it cheaper to fly from ORD (Chicago) to DUB (Dublin, Ireland) than from MSP (Minneapolis) to LAS (Las Vegas.)  Jeez!


I returned to work for one week only to be told we were going "black" for the next seven weeks. Furloughs make it very difficult to use earned vacation time off!

It was during this time we were also being "out-sourced" to Oliphant Golf Management Company.  I wasn't sure I would have a job, so why Blog about speculation?  I was offered and accepted employment with them and anxious to get started.

Karen and I attended the Golf Industry Show in San Diego.  I wasn't planning on going but I was notified that I would be recognized for my 25 years of certification.  I didn't get a "gold" watch, mine was "silver!"  A very nice dress-up watch to wear when we go out on the town or to church.

Marlene Schroedel suggested I blog about the things I did during my hiatus.  Well I do have one story to tell.  A lightning surge apparently destroyed my old Wisconsin Badger Door bell.  (It had a key board and my musically inclined daughters would program "On Wisconsin" into it.  When I replaced the battery, they would have to program it over again.  It was a pain.)  So when I saw Broan offered a new Collegiate door bell edition I asked for one for Christmas.  The only thing that made this door bell "collegiate" was the button back plate.  You had to download MP3's to program the music. 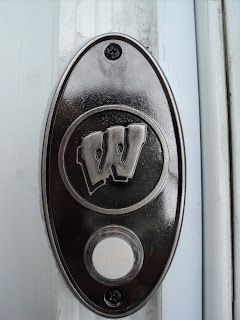 Not much of a problem, however it took me ELEVEN days to finish the installation and programming!  I had to build a back mounting plate to mount the button as this button combination was much larger than the old button.  I didn't like the first one and built a second.  Karen was impressed with the fact that her new doorbell button was illuminated.  I didn't have the nerve to tell her that the little light bulb fell out of the button on one of my wiring attempts.  There is a diode that you are to hook up to separate the sounds for the front and back doors.  Technical support told me to reverse the diode to make things work.  Didn't.  I thought for sure the bulb fell into the snow, when I turned to look for it, I crushed it under foot!  ARRGH!   Broan did send me a new bulb free of charge.  It works, the doorbell works and I'm finished playing with it.  BTW, It's programmed to play "Hot Time."  That is the song the Badger Band plays after every touchdown.  Go Badgers!
Posted by Mark Kienert, CGCS at 2:47 PM