While most people wore wide smiles with the record warmth earlier in the week of January 8th, winter finally arrived Wednesday evening.  The idea that it could snow that evening after a record daytime high of 48 degrees is absurd even by my standards.

My main concern now is what little snow/ice precipitation that fell over the weekend of the New Year had a chance to melt and form puddles.  This water had nowhere to go as drainage was nil due to frozen soils. Here is a photo of Tri City's 7th green.  Note how the collar height of cut dramatically reduces surface run off.  The ill effect of a poorly constructed flat pancake green. 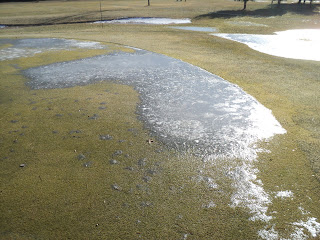 In this photo if you look closely you can see the effects of our "poor mans" attempt to open up surface drainage through solid tine aerification after the course was closed for the season on October 31st.  Note the parallel lines of milky white ice.  I call it "poor mans" because it doesn't measure up to to the overall effects when we deep tined greens with .75" solid tines to a depth of 10".  After all our struggles with winter injury we felt any drainage was better than not doing anything at all. 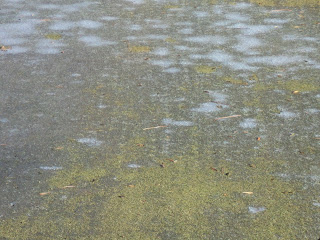 I've been asked if this winters lack of snow and precipitation caused me any concern to date.  Because of the lack of super frigid air I said no, but now with the ice I'm going to change my answer to possible.  It's always possible isn't ?  Let's hope not. More later, we'll see you this Spring.  _Mk
Posted by Mark Kienert, CGCS at 1:16 PM