Taking advantage of the weather (snowless course) work continued on tree and Sumac removals on the Club house hillside and the "original #4 fairway" of the Stiles and VanKleck's 1922 design of Bull's Eye Country Club. 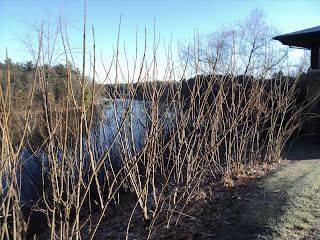 I'm always amazed at the capacity of growth of the Sumac plant.  Some canes cut down were at least eight feet in height!  (The sumac plants are stabilizing an unsettled excessively steep bank keeping the club house patio and putting green from sliding into the river...barely.) 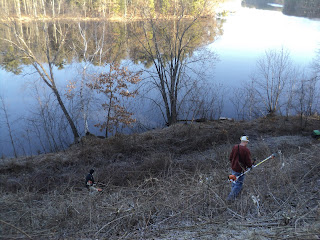 Twelve man hours later (counting the man taking this photo,) your view up river has been restored. 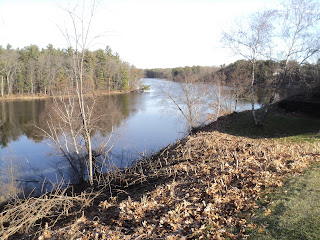 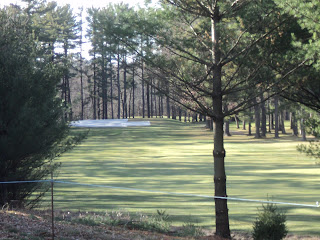 FYI:  Those trees were planted in the spring of 1987 or 1988.  Trees were "grubbed from the woods" and planted primarily to thwart winter sledding by the general public trespassing on our private property.  The sledders would stand on #10 green compacting the snow into ice killing the putting surface below.  By now most of you know first hand what winter kill looks like after this season of misery.  _Mk
Posted by Mark Kienert, CGCS at 2:32 PM