I'm a firm believer of seed establishment of turfgrass over sod's immediate gratification!

For many years I've maintained the mantra that "If it is sown there and grows there it will stay there until it dies there!"  Well that was until the miserable spring and summer of 2011 pushed me to the limits of my tolerance levels when trying to re-establish turf cover on our sixteenth greens putting surface.  I set the fifteenth of September as a drop dead date in my mind knowing seed establishment after this date is greatly compromised by frost and cold shorter days.  If measurable gains were not attained by that date, I would do something I didn't want to do and that was to plug out the ulcers with our nursery green sod.

My reluctance to use sod from our nursery green in the first place stems from the fact it is grown on some very bad greens mix (rounded sand particles making it unstable under foot and it's extremely hydrophobic.)  I didn't care to create a problem for myself in two locations until now.  Secondly, this sod is grown in full sun and would have to transition to a green site that is at best partial shade.  Third, this nursery sod is a hybrid bentgrass plant Alpha, whose density and color would not match up well in a putting green chock full of a "perennial" Annual Bluegrass plants. Turf that has survived under those light conditions in that location since the mid sixties. 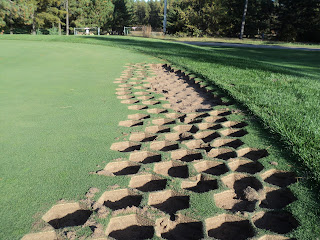 My network of peers from all walks of the profession all advised me to "avoid sod at all costs because there are too many obstacles to overcome, and the patches will be visible for most of a decade.  I can attest to that as there was an ultra visible sod stripe through the middle of one of our greens needed to repair an hydraulic oil leak that was visible for better than eight years when I took this job so many years ago.  I too remember using my own version of "washed sod" to hasten (another lesson learned) the opening of #15 green the summer of 1989 that remains visible to this day with a sharp eye.

"Washed sod" is a soil-less sod that has had the soil cleaned from the plants roots in order to avoid issues associated with soil layering.  Layering is when one layer of soil with certain physical properties is placed over another soil type creating distinct physical boundaries between the two.  It is these missed matched layers that create substantial issues in rooting and water movement across unmatched boundaries.  If these boundaries are too severe rooting will not take place preventing the sod from "taking" in its establishment phase.  There are probably easier ways to have said that but layering is an inherent problem associated with any sod establishment.  It has to be "baby-sat" as much if not more than a site that has been seeded and can still be lost through some sort of rejection  (I.E. being forced to grow at a lower height of cut than what it was maintained at before it was sold as sod.)

Why the failure this season?  Why didn't we see any re-establishment of the turf coming from below ground root structures as we have seen in other years when similar ice damage occurred?  Where was the tremendous reserve of Poa seed in the soil?  Seed that had been genetically altered to survive this shaded environment.  I'm still trying to wrap my mind around that one as I have too many questions that go to this day without sufficient answers.  Was it disease?  Did C-15 decline (bacterial wilt) finally remove the Toronto bentgrass?  After all this green was sprigged with Toronto in the mid sixties.  I would have thought the Toronto turf would have been history by now.

A disease sample sent to the University of Wisconsin Turfgrass Diagnostic Lab from this green did not show a cause for decline and currently is listed as "Abiotic Stress."  However speaking with Dr. Jim Kerns, turfgrass plant pathologist at the University of Wisconsin said and I quote, "this sample was 'unlike' any sample to cross my desk this season."  You can be sure the next time I see similar symptoms I'm going to personally rush a sample into the lab.

Why didn't our efforts to minimize seedling mortality work this year when it has so many times in previous years?  After all we raised the height of cut on this green.  We used a walking greens mower outfitted with solid rollers. We mowed this green every other day or not at all until the seedlings had a chance to break into its third leaf stage to further reduce mower shock on the new plants.  We hand watered exclusively and topdressed frequently to promote, protect and preserve the crowns and root systems.  We used fresh seed and covered the plots with "Seed-Guard" tarps to prevent mower injury and to limit foot traffic on these damaged sections.  Finally, the why of all whys!  Why didn't the plants that grew and established themselves in the aerification holes on our May 1st interseeding date spread out and fill in?  To this day you can still see the rows of plants just hanging back!  There by last count we spread six pounds of nitrogen on that turf to force spreading top growth.

To this end, we should consider limiting fall play on some of our weakened putting surfaces.  We know why turf dies but we do not know when the turf dies.  As the turf is no longer actively growing, how much additional duress can we place on weakened turf before it succumbs is any ones guess?  We'll all know the answer to this question next spring. 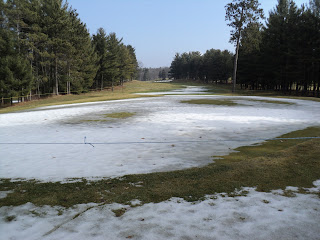 Speaking of next spring.  Should we experience another episode of winter injury like we did this year, there will be temporary greens employed to hasten recovery!  With that said, we will be utilizing as many preventative measures as our budget allows to mitigate turf loss this winter.  We will be removing a ring of sod to aid surface drainage before winter in an attempt to alleviate the ponding of water on putting surfaces.  Greens will also "solid tine" greens before snow cover to open some channels to move water away from the crowns.  (Deep tining would be better.)  And will be following the latest development in turf covers to see if they could assist us here.  _Mk
Posted by Mark Kienert, CGCS at 3:16 PM